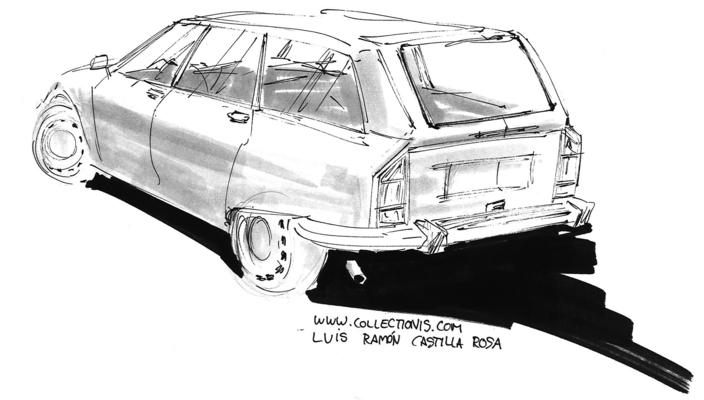 The Citroën GS, manufactured from 1970 to 1986, came to fill the gap that the french manufacturers had left between the cheapest (2CV and Ami) and most expensive (DS series) models in the market. This gap was very important, because the increase of the middle class gave it higher purchasing power, and Citroën’s competitor, Renault, took advantage of it with models like the R16. In fact, in 1963 Citroën began Project F in order to make a vehicle for the intermediate sector, but the R16 appeared in 1965, and Citroën decided to abandon the project 2 years later, since Project F was quite similar to the R16. Instead it initiated Project G, which brought the GS into being.

This model’s life span is bitter sweet for the brand. On one hand, it is treated as a very modern and comfortable vehicle, with hydropneumatic suspension, a high coefficient of aerodynamic penetration, etc. It has also had very successful sales, with almost 1.9 million GS’s and 576,000 of its successor, the GSA, manufactured, which allowed it to win the title of Car of the Year in 1971. On the other hand, with the bankruptcy of Citroën in 1974 (in part due to the elevated adaptation costs of that factories payed to manufacture the DS’s successor, the CX), and the purchase of the company by its rival, Peugeot, it came to be integrated into the PSA group.

Our Universal Hobbies miniature, in the Break version with 5 doors, is moderate but elegant. It is true to the original, equipped with the rims and wheels, the front grill with the brand’s emblem (double Chevron) in silver, the silver rimmed taillights, and a detail that is almost imperceptible; the separation between the doors, hood and the bodywork is a slightly darker color, which makes it more realistic.