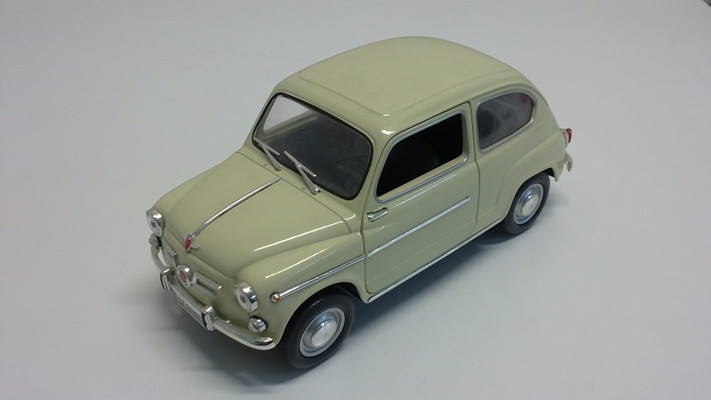 The SEAT 600 (commonly known in Spain as the ‘seiscientos’ (six hundred) or ‘pelotilla’ (little ball)) is the Spanish version of the Fiat 600 designed by Dante Giacosa and produced from 1955 in Italy; the SEAT 600 went into production in Spain in 1957 and was a key element in the era’s economic development, since it was the first car which was accessible to families. Even today people can remember those ‘adventures’ to the beach with the whole family including grandma squeezed in the SEAT 600, unimaginable conditions for current comfort and safety standards.

SEAT at the time was made up of 5000 workers, and belonged to Spain’s National Institute of Industry, various banks, and to Fiat which had a 7% share in the company.

The first version, the ‘standard’ (1957 – 1963) came equipped with a 633 cc engine with 21 hp, which made it capable of reaching 95km/h (59 mph). Later came the D versions (1963 – 1970) in which they increased the engine size to a 767 cc, with 29 hp, and had a maximum speed of 108 km/h (67 mph). This is the miniature for our article; while many Die Cast fabricators have reproduced this model, we want to focus on the Solido version (scale 1:18), very true to the original, with the ‘suicide doors’, bonnet which opens, a very detailed engine, front wheels and a steering wheel which turn, as well as many exterior details like the SEAT badge on the front, the registration plate, headlights, tail lights, door handles, speedometer, etc.

SEAT later produced the E and L versions, with the engine finally reaching 32 hp, allowing it to get to 120 km/h (74 mph) and having exchanged the door function for the more standard style of the age.

As well as other versions like the convertible and the formichetta, they made a four door version in Spain with 18cm extra length, called the SEAT 800, which, although attractive, didn’t receive a great deal of interest, meaning that only 18,000 units were produced between 1964 and 1967.

After experiencing strong competition from other models of the age (like the Renault 5, and from SEAT itself, the 127 as of 1972, which ended up as its replacement, instead of the SEAT 850), in 1973 the SEAT 600 went out of production after producing nearly 800,000 units, of which it is estimated that 10,000 remain in working order today, many of those belonging to various fan clubs all over Spain. 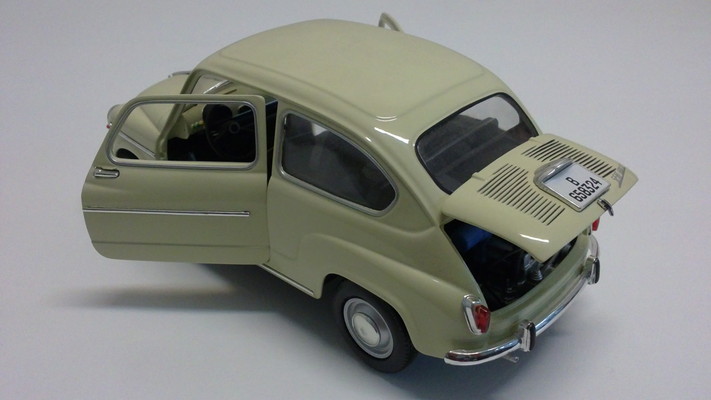