In 1999 driver Mika Häkkinen was proclaimed F1 champion of the world with his McLaren Mercedes MP4/14.  This vehicle, the object of this article, was designed by Adrian Newey, a key element in the triumph, along with his MP4/14 design of the previous year with which driver Mika Häkkinen and the McLaren builders also won the world championship after a 7 year “drought.”

What is also seen when looking closely at this picture, is that the F1, as in many other activities in life, advances and triumphs when there is competition, when there is a push to overcome another (ideally one would fight to overcome oneself, but it seems that this is less frequent); in this case, to this date, McLaren achieved the world champion in the maker category in: 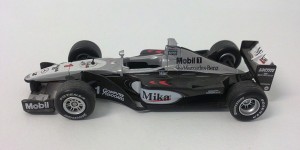 The actual vehicle that corresponds to the miniature of our article is found currently in the exposition at the Donington Museum (Donington Grand Prix Exhibition, http://www.donington-park.co.uk → Grand Prix Collection).  This museum has the most McLaren race cars in the world, as well as the one that exhibits the biggest collection of drivers’ helmets in the world.

An interesting fact is that our RBACollectibles miniature is decorated with the logos and names of the sponsor companies (Computer Associates, Mercedes-Benz, Boss, Mobil, Loctite, Bridgestone, etc) except for the West tobacco company that has been substituted for Mika, the driver’s name (although the 2 gray and red bands, distinctive of the West logo, are still there).  This has been done to meet the new regulations adopted in many countries to prohibit the advertisement of tobacco. 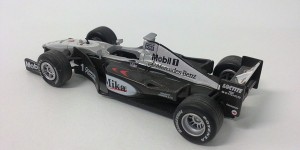