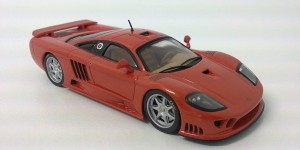 In addition to the motor, its grand performances in velocity and acceleration (it is capable of accelerating from 0 to 100km/h (62 mph) in 2.8 seconds!) are due to its light weight, only 1,247 kg (2743.4 lbs).  This is in part due to its chassis made of steel and aluminum, with its honeycomb shaped reinforcements, making it safe and equally impact resistant in the front and the sides.

In general, all the components of this vehicle have been developed in the most specialized centers in the world: the Brembo brakes are italian, the wind tunnel tests were done at Glasgow University in Scotland, the aluminum motor (with a numerous amount of modifications) is based on one of Ford’s V8 models, many of the technological components were provided by companies located in the Midlands region of the UK, etc. 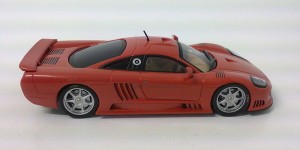 An interesting fact is that the interior design is slightly asymmetrical; for better driving, the driver’s seat is displaced a bit more toward the center of the vehicle than the passenger seat, the rearview mirror is substituted for a video screen and camera at the rear of the car, and the steering wheel can be taken out to access an entrance/exit of the car (this could be seen as an advantage or a disadvantage because in most sports cars this is not necessary).

In contrast to other sports car manufacturers, that are in the habit of using a limited color palette, Saleens come in a wide variety of colors, as is the case with our dark orange IXO Models model.  Its rear windshield is dark (its a shame we can’t see the motor), but it has numerous fine details such as the disc brakes and calipers that are clearly visible through the rims, the various lamps in the headlights, the silver framed taillights, the aperture in the roof right next to the antenna, the 4 exhaust pipes painted black and silver, etc. 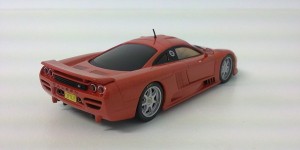